“Well, I do have my veterinarian degree, so I can give the stitches!” It’s 1:30 a.m. and I’m standing in the emergency room outside of Santa Cruz, Chile. A wine tour guest had a “hot tub” accident and impaled their leg on a wine glass. “Is there not a surgeon on duty?” I ask. “No, the surgeon is operating on another. Looks like a drug deal gone bad.” And thus began the first day of Heathen Wine Tours in Chile. An auspicious start to be sure!

If you had asked me 10 years ago, even 5 years ago, my thoughts on Chilean wines, you wouldn’t have been able to print my likely profane response. As an old school sommelier with a penchant for Old World wines, for me to accept, much less celebrate, the juice of Chile would have been absurd! But here I am leading the huasos to the new horizons of South American vino!

In March, our Heathen Wine Tour group visited nine winery owners and winemakers in Chile, from classic producers who have paved the way (Casa Silva, Koyle, Casa Marin) to big gun award winners (Clos Apalta), to the new “little guys” who are doing things their way and making wines in styles that most don’t recognize in this part of the world (Villard, Amayna, Clos De Luz). After living in Argentina’s shadow in the wine world for much of the last 30 years, Chile has finally found its own niche and is now pushing above and beyond with high elevation, coastal vineyards and New World thinking that has nothing to do with Malbec!

Chile lies on the west side of the Andes, the highest mountain range in the southern hemisphere, sequestered by the Atacama Desert in the north, the Pacific to the west, and Patagonia to the south. Over the years, Chile has done much to hinder their own viticulture success with laws on imported/exported wines, government that let’s just say was not exactly “user friendly,” and sometimes not even knowing what they had planted in their own back yard. When Carménère, a grape originally from Bordeaux was brought to Chile in the 1850s, it was thought to be Merlot. It wasn’t until 1994 that DNA testing showed it to be Carménère, a grape thought to be virtually extinct in the rest of the world. In 1998, Chile’s Department of Agriculture finally recognized the grape as Carménère and claimed this previous treasure as their own.

While most of our group had never been to Chile, I had already taken previous jaunts here and fallen in love with the food, culture, some of the wines, and, most of all, the people. There’s seafood from a 2600 mile coast, veggies that would rival those from California’s central coast, and meats (lots of meats) from a culture cherishes their barbeque (asado) as much as their polo matches. To top all that, Chilean people are some of the most kind, respectful and genuine of any country I visit, and the vino scene here has really taken off. 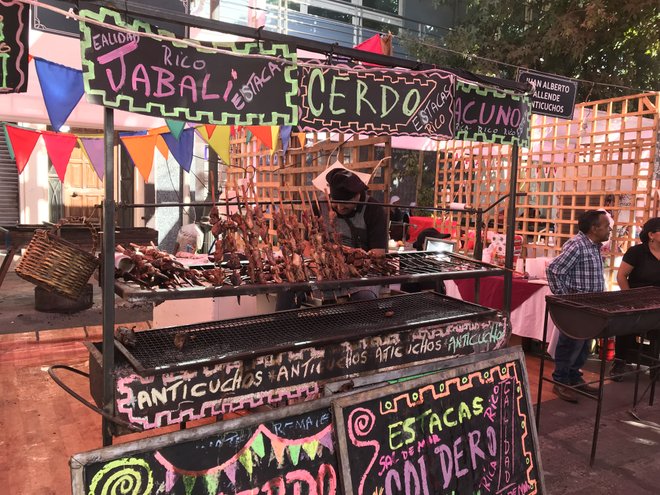 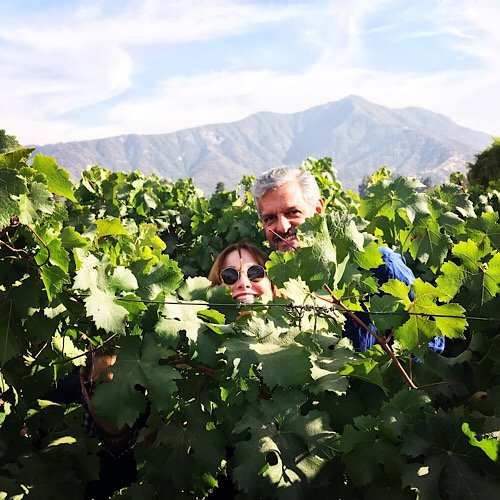 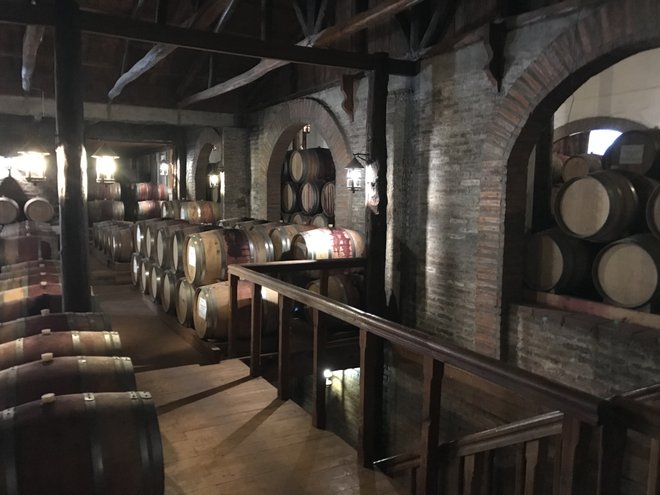 From Santiago, we headed south to the Colchagua Valley for three days of visiting wineries known for Carménère, Cabernet Sauvignon, and other full-bodied reds. We took full advantage-for the harvest season, spending hours frolicking in vineyards and playing in the grapes. Our first afternoon was spent in the small village of Santa Cruz enjoying the “Vendimia” or the festival of the new harvest. Locals flock to the town square for “cueca” (national dance competition), crowning of the “harvest queen,” lively bands, streets lined with open fire grills of meats, empanadas, beer, and, of course, wine, lots and lots of wine. The local wineries come out to pour their goods on this weekend of harvest joy. It’s reminiscent of homecoming weekend in the South plus the state fair and all of your moonshining neighbors converging on town square at the same time! The heat, dancing, and asado made drinking rosé as refreshing as cold water from the hose in the yard on a summer day.

Back in the emergency room, the veterinarian stood proudly admiring the stitches he had given our “hot tubbist” as the surgeon appeared. With a look of disbelief, the surgeon promptly removed the “animal stitching.” Who knew for only 100 pesos you could get stitches twice in the same seating in Chile?! 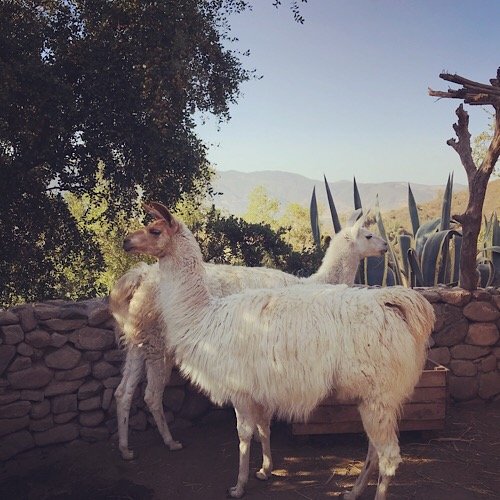 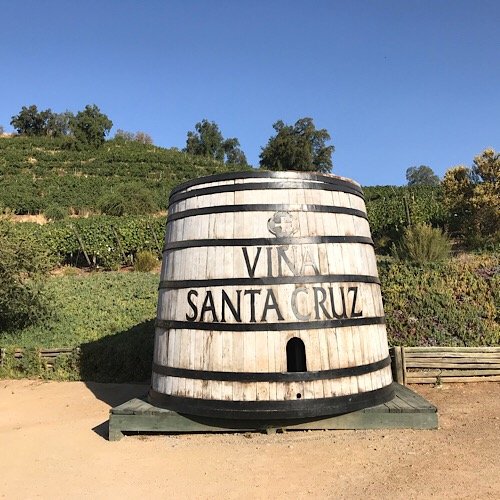 Over the next days, we enjoyed lunch in the polo fields at Casa Silva after tasting wine from barrels, cable car rides to the top of the mountain for tribal traditions at Vina Santa Cruz, and walks in the organic vineyards at the foot of the Andes at Koyle with the winemaker as his sheep grazed in the vines. We visited Clos Apalta for private “al fresco” lunch at the owner’s residence in the vineyards and tasting with Diego the assistant winemaker. There we toured one of the most awesome cellars I’ve ever seen (and that’s a lot of cellars). The wine making facility is seven floors built into the side of a mountain, with each floor playing its own integral role, and the bottom 2 floors built directly into the granitic stone. An unassuming oval “tasting table” in the barrel room opens up like the Millennium Falcon in Star Wars and this stairway to heaven leads to the owner’s private cellar. At breakfast the next morning another resort guest overheard our conversations about the cellar and proclaimed, “I worked for the family and have never been allowed in the cellar!” Guess he should have gone on a Heathen Wine Tour!

Wednesday morning we were off to the coast of Casablanca to find the next generation pumping out crisp wines in high elevation vineyards. Four miles from the Pacific, these grapes relish cool breezes that provide a scintillating backbone of zesty acidity. The wines leap from the glass with wafting aromatics and are almost salty from the sea breeze, making them the ultimate complement to the fresh mussels, ceviche, sea bass and octopus heaped upon us at every turn. We then stopped in Almahue Valley to visit one of the top surprises of the trip, Clos De Luz winery, where we strolled through the oldest Carménère vines in Chile (planted in 1945) hearing tales from Senor Gabriel. The charming and handsome father of the winemaker delivered us to an impromptu tasting on a nook surrounded by vines and mountains in the valley. The Grenache and Syrah (produced in 500 case increments) dazzled as we feasted on fresh bread and local cheese. A tour of the family hacienda, meeting their polo horses, and lunch in the vineyards, was  followed by a long nap on the way to Casablanca. 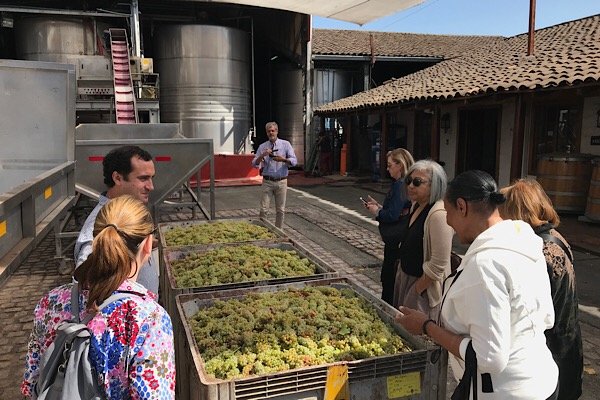 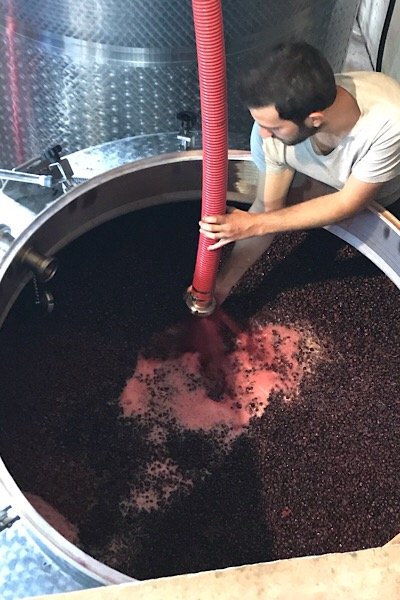 The next morning, our quest was to meet Jean-Charles Villard in San Antonio Valley. Truth be told, would be just as happy catching waves in Hawaii as he would making fine Chardonnay on the coast of Chile. He and his mother know free labor when the see it and put us to work assisting with pump overs in the winery. We escaped bottling to enjoy local seafood paired with richly balanced chardonnay and pinot noir on the porch. The afternoon was spent in Leyda Valley, minutes from the coast, where our friend Anthony runs the Amayna and Boya wineries, making Pinot Noir and Syrah. We started with a tasting overlooking the entire valley, then glasses of older vintages with the winemaker in the cellar, and ended the day by celebrating a tour member’s birthday with pisco sours, pizza, and champagne on the beach in Santa Domingo.

Our last visit was to the minuscule town of Lo Abarca put on the map by Casa Marin, a winery founded by the leading lady of wine in Chile, Maria Luz Marin. While tasting bottles from her cellar, we listened to Ms. Marin’s story of twists and rejection as she clawed her way to the top of the industry. A 19th century horse-drawn carriage carried us through the village before lunch in the vineyards where we drank Pinot Noir from 2011 while the 2019 Pinot Noir grapes was being picked from the vines surrounding us.

On our ride back to the resort, I called to see if a doctor could ensure our “hot tubbist” had clean gauze for the flight home. When we arrived, owner Rodrigo met us with the sad fact that there was no doctor available, but he had “very good news.” Jokingly I replied, “Let me guess, you’re a veterinarian?!” Rodrigo incredulously replied, “How did you know?!” It seems he was a University of Florida graduate as well! The name of our “hot tubbist” and resort have not been stated for obvious reasons. No animals were injured during this trip, however I do feel they would have been in GREAT hands! Join Heathen Wine Tours for an excursion. We have upcoming trips to Italy. Oregon, Portugal & Spain, and Virginia with space available.

Wearing an apron in prison! The tale of a chef, his shank and a hero!

Broken Dreams... a man and his Vespa in Italy!